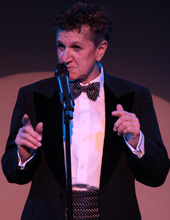 Peggy Shaw is an actor, writer and producer. She co-founded The Split Britches Theater Company with Lois Weaver and The WOW Café in New York City.  She has received three OBIE Awards for her work with Split Britches - for performances in Dress Suits To Hire, Belle Reprieve and Menopausal Gentleman. She also played Billy Tipton in the American Place production of Carson Kreitzer’s The Slow Drag.  Split Britches are a part of Staging Human Rights, where they work in prisons in Rio De Janeiro and England, and are currently Artists In Residence at the Hemispheric Institute at NYU.  They are associate artists on the Clod Ensembles Performing Medicine project-creating workshops on gender and difference for medical students and health professionals. As part of this project Peggy has made a new piece, in collaboration with The Clod Ensemble, Must:The Inside Story; poetically examining the inside of her aging queer body, which she is performing and touring in lecture and anatomy theaters. Must has just returned from a run at Under The Radar Festival at The Public Theater in New York City.  Split Britches received a commissioning grant from Dixon Place, where they performed their new show Lost lounge in New York for three weeks, after a three week residency at The University of Richmond. Peggy has been a collaborator, writer and performer with Spiderwoman Theater and Hot Peaches Theater. She co-founded the OBIE Award winning WOW Café in 1980. Peggy won the New York Foundation for the Arts Award for Emerging Forms in 1988, 1995 and 1999, and 2005; she also won the 1995 Anderson Foundation Stonewall Award for “excellence in making the world a better place for gays and lesbians ” and a 2003 Otto Rene Castillo Award for Political Theatre. The Foundation for Contemporary Performance recently awarded Peggy with Theatre Performer of the Year. Michigan Press will publish a new book on Peggy, edited by Jill Dolan, which will include the scripts for her three solo shows You’re Just Like My Father, Menopausal Gentleman and To My Chagrin, and will also include the script of Must: The Inside Story. Peggy is a freelance teacher of writing and performance around the world.

As part of her residency Shaw brought the performance Lost Lounge to the Great Hall, devised, developed and performed with her long term collaborator Lois Weaver. Their work as Split Britches has been performed all over the world, and in bringing Lost Lounge to the Great Hall they evoked the parallels in the redevelopment of New York with the redevelopment of London, particularly in the East End. Students and alumni of Queen Mary were heavily involved in the performance as stage and technical crew and took the opportunity to develop new skills working with an internationally renowned company.